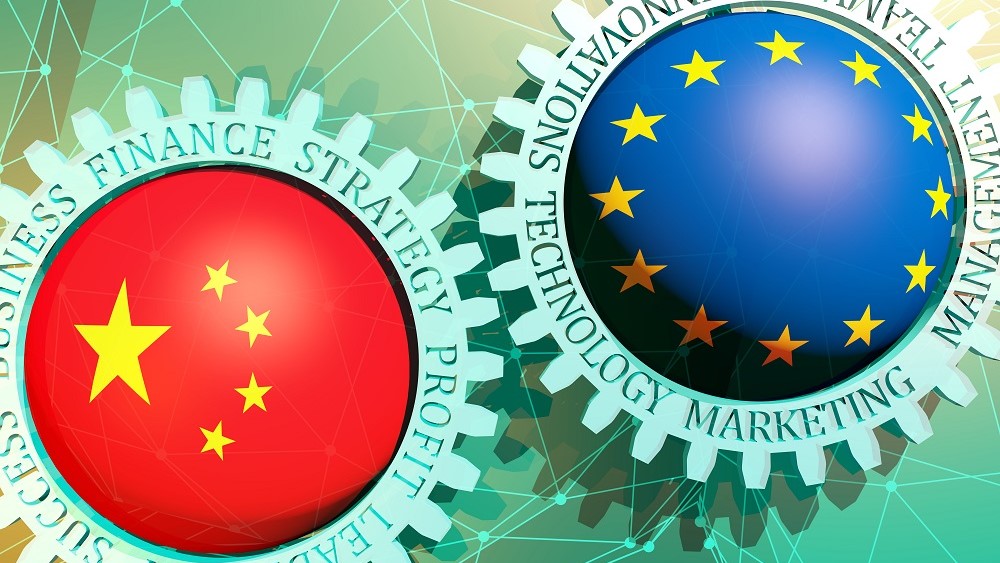 Foreign direct investment (FDI) in China grew to over USD 100 billion for the first time in 2010, spurred on by various reforms and liberalisation policies introduced from 2001, after joining the World Trade Organisation (WTO). By 2018, China was ranked as the world’s second largest FDI recipient after the United States (Source: UNCTAD’s 2018 World Investment Report). China’s economy was also ranked the second most attractive to multinational companies for 2017-2019, after the US. With steady growth for several years, FDI inflows to China continued to increase between 2016 and 2017, from USD 133 billion to USD 136 billion. We look into some of the key trends and features of the overall Chinese FDI climate and European FDI in China as well as the future outlook.

Greater enthusiasm for FDI from within China is all part of the policy of opening China up much more to the outside world, aiming at creating a better general business environment and a better overall structure and distribution of investment within the country.

The Chinese government’s efforts to achieve a better geographical spread of investments have allowed Central China to see its FDI continue to be buoyant over the period since 2001. According to a statement released in early 2018 by the Chinese Ministry of Commerce, 35,652 foreign funded companies were set up in China in the previous year, up 27.8% from 2016. FDI in the 11 free trade zones reached almost USD 16 billion in 2017, up 18.1% year on year, exhibiting much higher growth in these free trade zones than that for the national average. In order to attract further foreign investment, the country has introduced mechanisms to improve the delivery of major foreign investment projects, reduce import tariffs, streamline customs clearance and establish an online filing system to regulate FDI(Source: Santander).

With trade frictions with the US continuing, new measures are expected from China to help bolster the country’s economy and attractiveness to other sources of FDI (Source: Societe Generale). And as a result of recently announced liberalisation plans, inflows to China could see continued growth over the next few years. With increased domestic consumption, move to high-end manufacturing and a huge labour base, the country is still an attractive market for foreign investors. Nevertheless, a number of factors can also hinder such investments, such as China’s lack of transparency, legal uncertainty, lower levels of protection of intellectual property rights and protectionist measures which favour local businesses.

Sources of FDI in China

In 2017, Hong Kong was the largest investor in China at 72.1% of total FDI (Source: UNCTAD). However, this figure will include within it, many other international companies including European companies, investing in China via Hong Kong. Such an investment stream, though ultimately being invested in the rest of China counts as part of Hong Kong FDI, separate from China’s direct FDI statistics. Other countries including Singapore, the Virgin Islands, South Korea, Japan, the United States, the Cayman Islands, the Netherlands, and Germany were other significant direct FDI investors in China in 2017 (Source: UNCTAD).

Manufacturing and Tech are the top Chinese recipient sectors for FDI 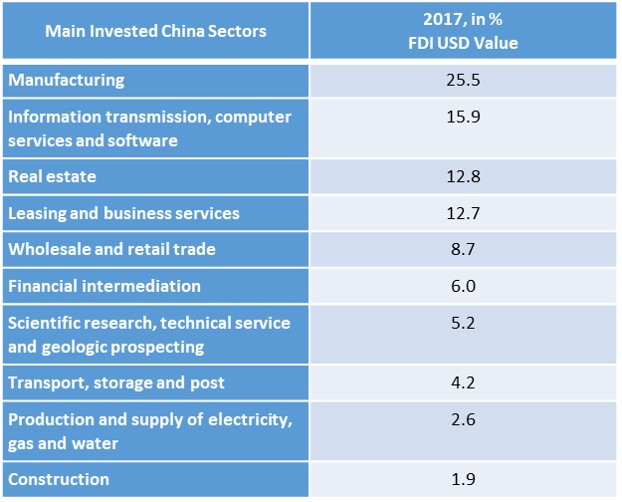 FDI inflows to the Chinese high-tech and tech manufacturing sector have been rising significantly and currently account for almost a third of the above total FDI inflows. For example, Samsung is investing USD 7.2 billion to expand its product line of memory chips in Xi’an. In 2016, Apple made a USD 1 billion funding deal with Didi Chuxing and in 2017 Japan’s Soft Bank, along with other companies, contributed to a USD 5.5 billion funding round for Didi Chuxing as well(Source: Societe Generale).

The overall future outlook for EU FDI in China

The EU-China 2020 Strategic Agenda for Cooperation, commenced in 2013, aims to improve investment for European and Chinese investors by creating investment rights and guaranteeing non-discrimination.

Brussels has identified this as its main route to improve access to the Chinese market for the mid to long term.

Senior EU officials and Chinese premier Li Keqiang issued a joint statement in April 2019 in Brussels on progress with the treaty and also signalled China’s willingness to discuss EU concerns about state support for its companies and forced technology transfer. Leaders have agreed to review progress next year, in 2020, the intended date for treaty fruition.
Mr. Li said the two sides had brokered a ‘substantive’ agreement that would guide negotiations and bring ‘concrete benefits’.

A successful treaty would make it much easier for EU investors to buy stakes in Chinese businesses, helping to address concerns that China can make strategic acquisitions in Europe, whilst European businesses have higher hurdles to implement equivalent investments in China(Source: FT.com).

With over 150 years’ experience and expertise of doing business in and with China across various industries, we see it as a matter of course that each business requires a customised solution for its approach to the Chinese market. In today’s highly transformative Chinese business environment where technology disrupts both industries and business models at an ever faster pace, it is more pivotal than ever to collaborate with a long-term oriented partner who possesses the market know-how and is in a position to share financial and market risks.

It is our mission to create long-term value through customer-centric and customised approaches. possesses the market know-how and is in a position to share financial and market risks.  Our equally valued international business partners range from resource-limited and capital constrained small and medium-sized enterprises (SMEs), to hidden champions and global established well-known brands. Being able to leverage our competencies gained from collaborating with numerous national and international businesses in China, we are able to provide a comprehensive range of service solutions across all functional areas and the entire value chain to make your China business a success.

For more information about doing business in and with China, please contact us at marketing@bj.melchers.com.cn.